Homepage > Artificial stones in the antiquity

Artificial stones in the antiquity

The stones used for the construction of many of the ancient pyramids were artificially molded, in situ, as were the great stones of Cuzco, Ollantaytambo, Machu Picchu, etc.

The Famine Stele or Hungry Rock; its hieroglyphs describe in detail the technique for stone softening. The god Jnum passed this information to Zoser, second Pharaoh of the Third Dynasty 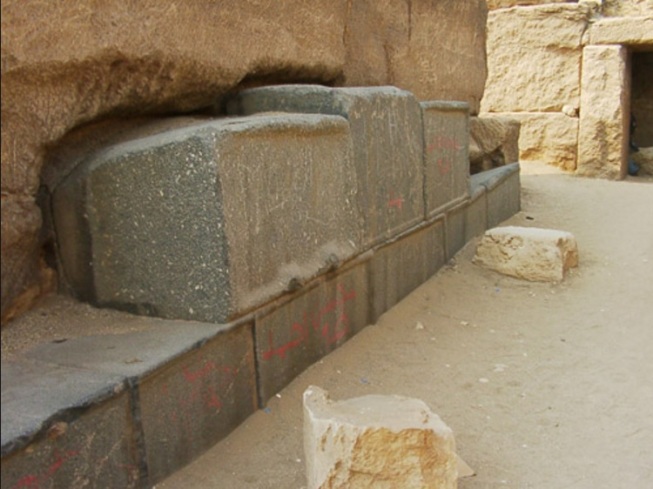 Of the temple of the pyramid of Menkaura 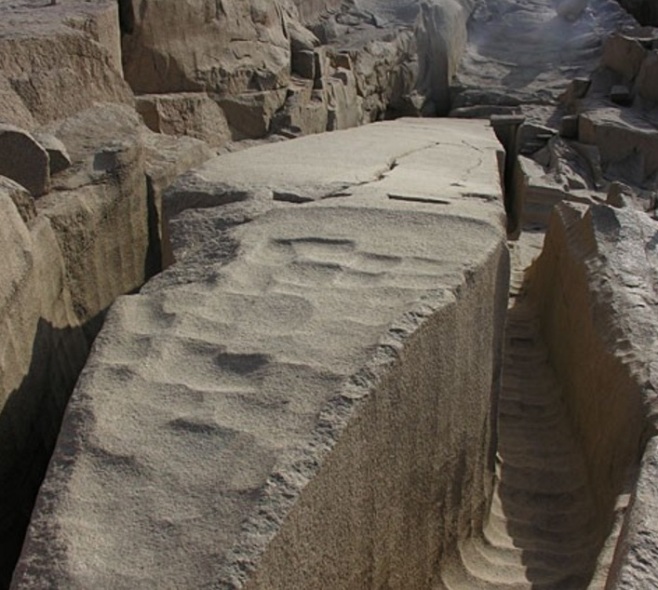 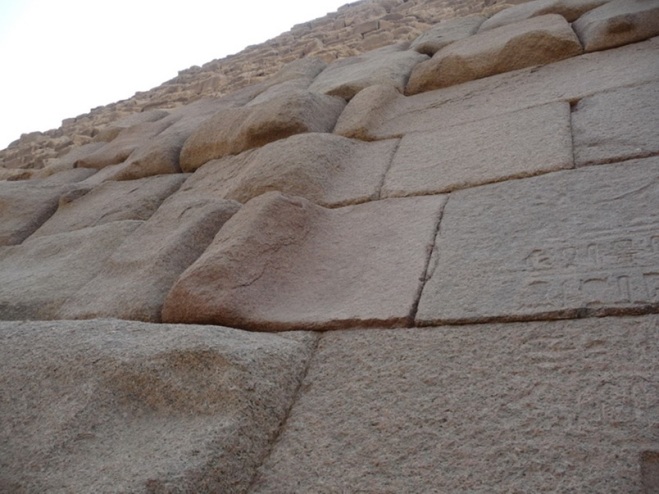 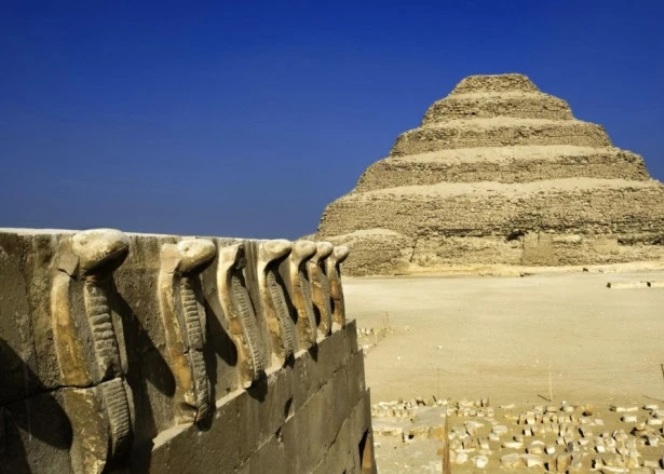 Relief in stone, in Saqqara, Egypt

Joseph Davidovits, an internationally recognized French scientist, has driven to many Egyptologists up a wall. His conclusions are that the blocks of the Great Pyramid were not cut, but molded, something similar to cement and other chemical processes of construction made by man.

After 10 years of research, there is no doubt for Davidovits; the builders of the pyramids were not stonemasons but chemists.

Researchers* have an added problem in explaining why there are human hair, threads, air bubbles and even human nails inside the rocks from the Great Pyramid. Through microscopic photography, Davidovits has come to find evidence of intrusive elements in more than 20 rocks.

About the ancient techniques of artificially making stones, the Greek historian Herodotus and the Roman Pliny gave us complete information, possibly obtained from the Egyptian industry itself. Not only the Famine Stele details the elements for the manufacture of artificial stones, but other evidences seem to indicate that this knowledge was exclusive of a chosen group of people that transmitted the secret formula to the followers of the work.

The Irtysen Stele, made in limestone and cataloged in the Louvre with the number C-14, brings us more evidence on this same subject. Irtysen was chief of the craftsmen, scribe and sculptor under the reign of Nebhepetre Montouhotep, sovereign of the XI Dynasty 2033-1982

"I know the parts that pertain to the casting technique that molds, the name, the weight of the ingredients according to their exact recipe, the making of the mold, so that each fragment goes to its place."

*of the official science, those we call archaeologists and Egyptologists

Stele of Irtysen, currently in the Louvre

From the area of Carnac, France, there is much evidence that the stones of the menhirs are artificial 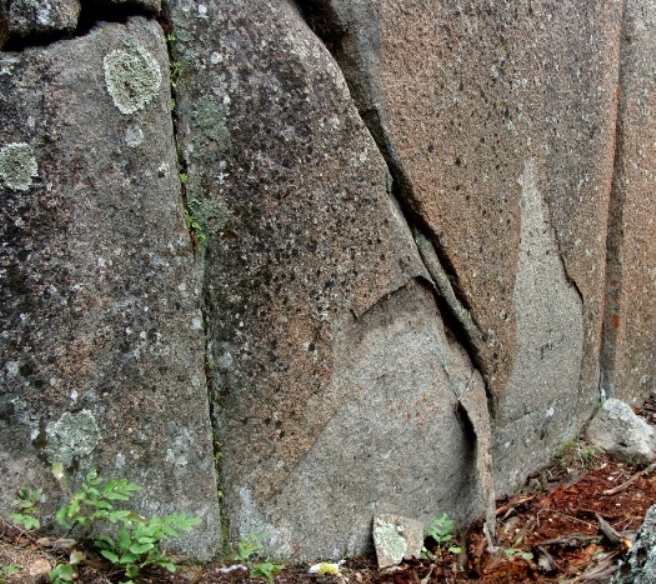 Stones of dolmens in the Montana area, USA; outer layer in pink granite, but the interior is formed by a concrete type; according to Julie Ryder's publication on Montana dolmens 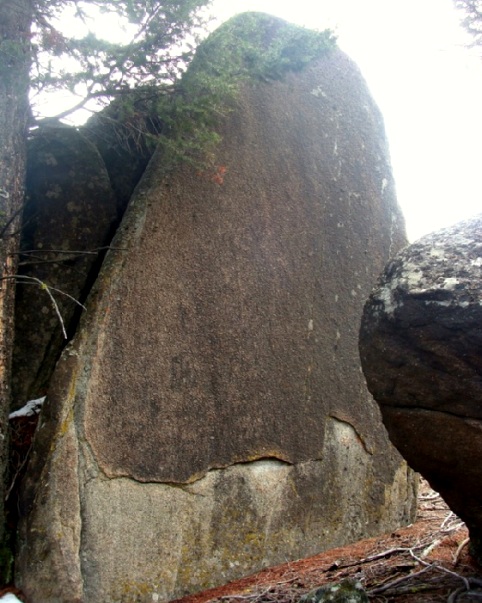 Another example of Montana; as in the previous case, pink granite on the outside and concrete inside

Megaliths of Montana, an interesting information

Dolmen of Montana where the detachment of the outer layer that once was mold is clearly seen; taken from the works of Julie Ryder

Thus we can explain the fact that we find old stones in which there are no visible holes but they sound hollow; it would be a thick mold and its hollow interior. This is an example with a granite stone from the pyramid of Menkaura, the smallest of the three pyramids of Giza 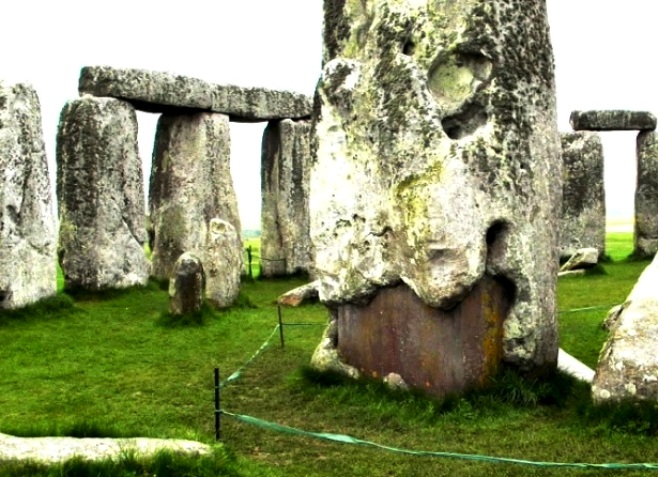 The stones of Stonehenge are also artificial; in its interior exists a type of different stone under a thick mold

Sphere of Kazakhstan; the outer layer, a thick, cracked and detached mold

Another sphere with mold, although this one is of thin walls 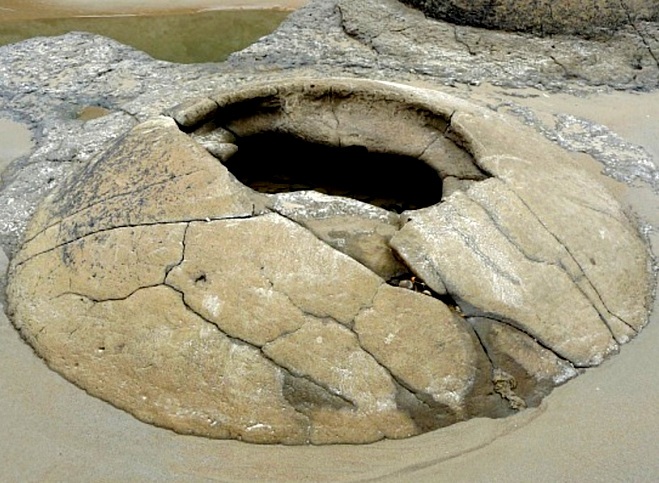 This is a Moeraki sphere from New Zealand; these spheres are hollow; the mold was not filled 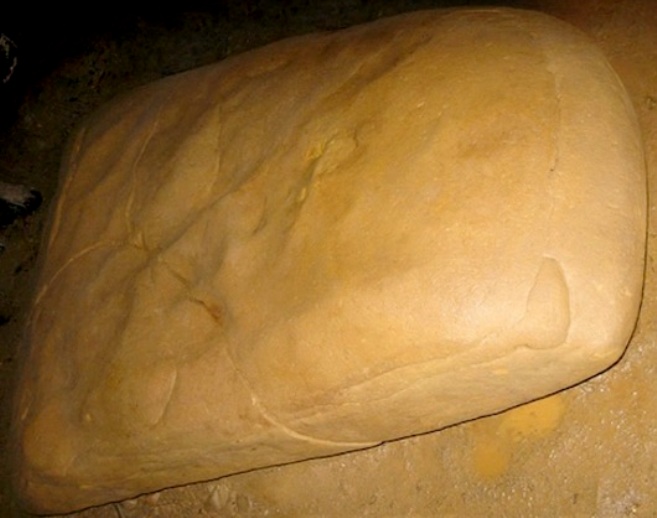 Artificial stone in the pyramids of Bosnia

From the Pyramid of Menkaura, Egypt; the mold is partially peeled

Cusco Street; In many stones the detachment of a layer is observed, the outer layer corresponding to the mold in which the stone was made

Stone of the 12 angles of Cuzco; the pickling of the mold is observed 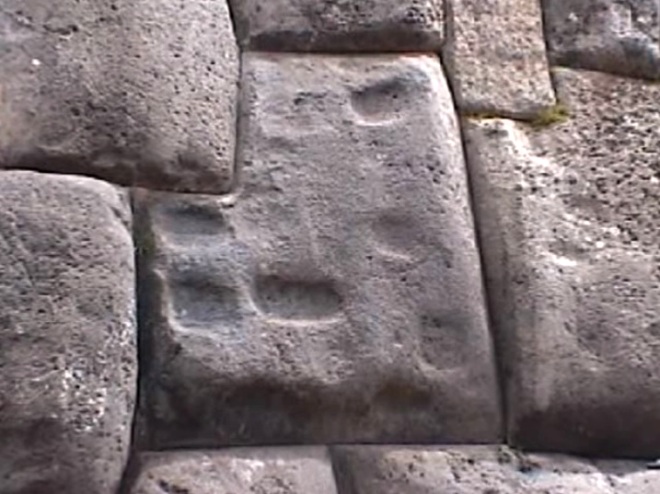 Of Sacsayhuaman; marks on the stones 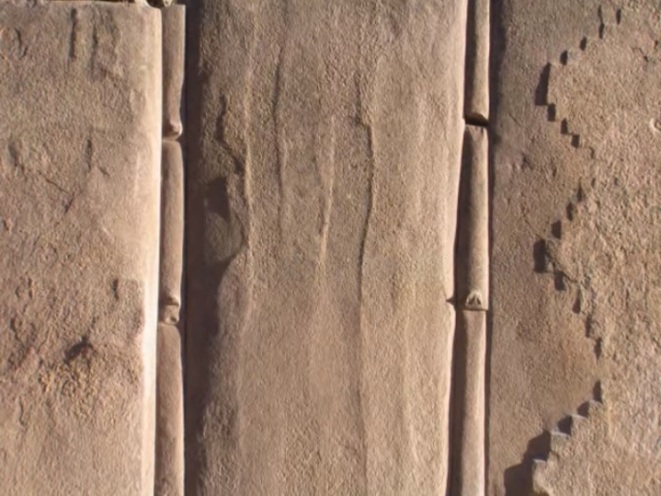 Of Ollantaytambo; smoothed with a kind of paddle at the time of construction

Of Ollantaytambo; the material is pink granite; many people realized that, because of the marks, they are artificial stones; but the pink granite melts at 1260 ° C and they would have needed an advanced technology in the antiquity to work these stones to that temperature in the outside (without furnace) 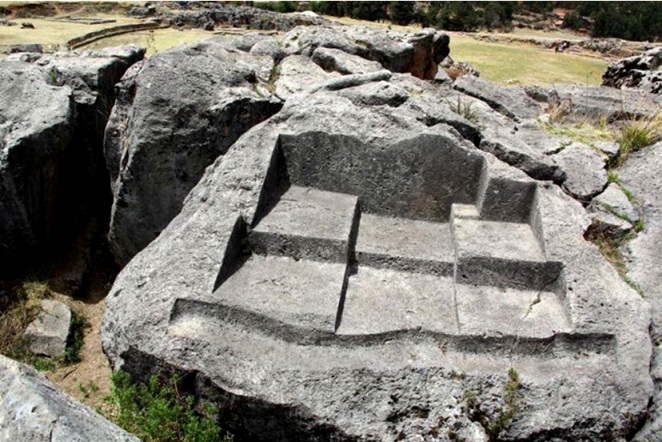 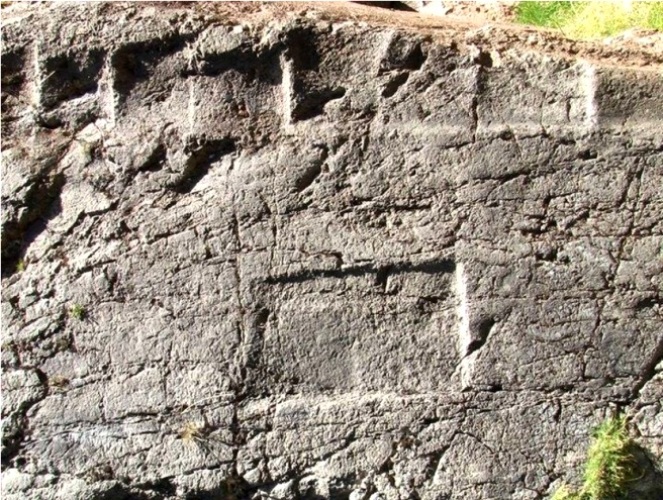 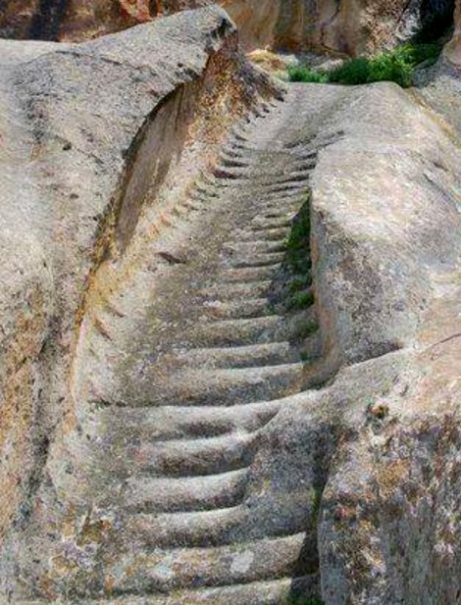 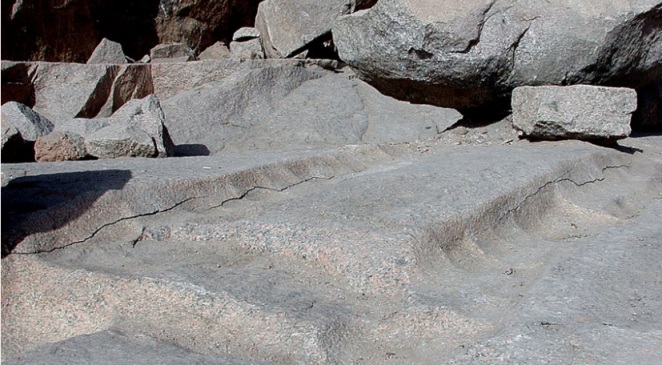 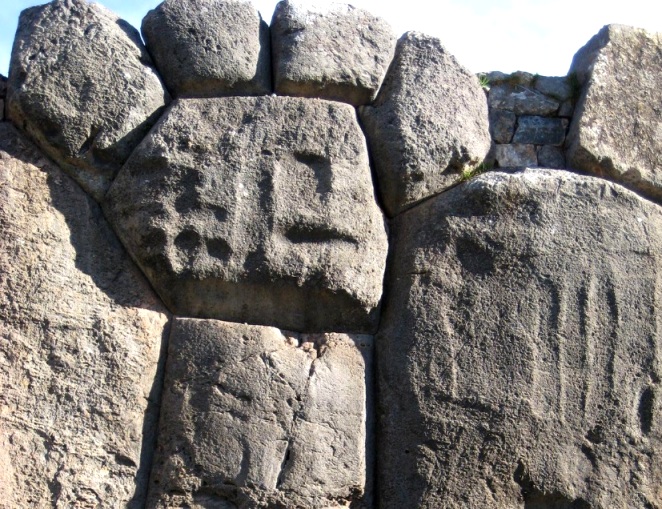 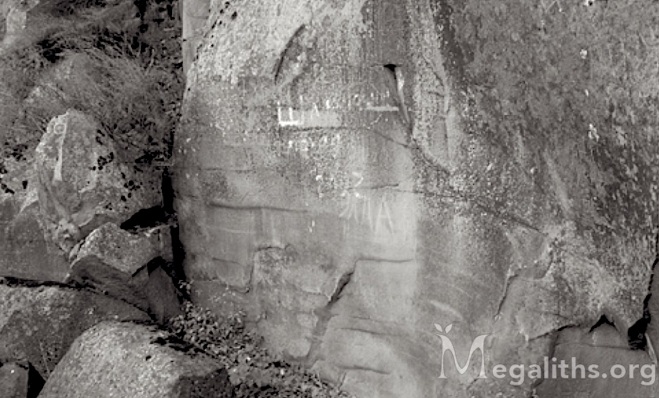 Megalith in Russia; also it is seen that it is artificial

Of Calabria, Italy; pickling of the mold 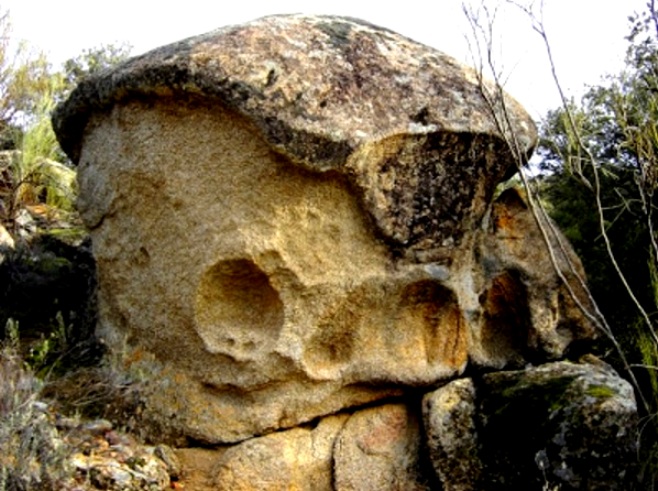 Another example of artificial stone with pickling

Of Nemrut Dagi, Turkey; it represents Antioco I shaking hands with Mithra. It has all the appearance of being an artificial stone with an artificial mold, but part of the mold has deteriorated

Shamash, Sun God of Akkad receiving homage from an individual whose head is not seen by the rupture of the mold 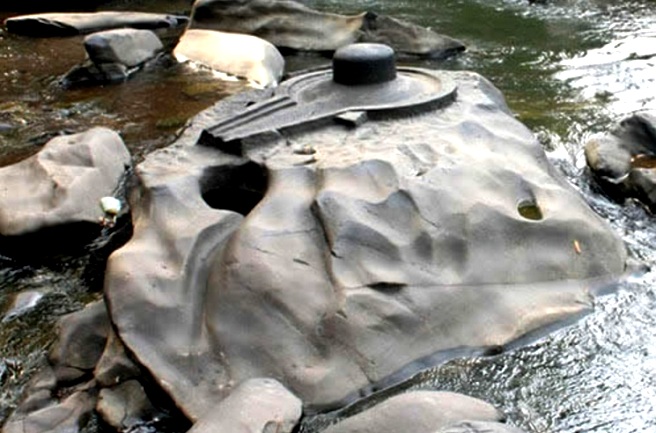 Of Indonesia; Stones made with mold

In a cave in Utah, USA; It is stone, but seems as if on occasion this stone would have been soft, like clay, or as if it had been temporarily softened

Smooth stones with a kind of paddle before setting

In red granite; the minimum age of Tiahuanaco is 14000 years; that is to say, it is antediluvian, since the last deluge occurred 12000 years ago

VITRIFIED STONES IN THE CUZCO AREA

Alfredo Gamarra was a pioneer in the study of vitrified and molded rocks and his theories are as surprising as spectacular as well as audacious; his son Jesús Gamarra Farfán continues his research on these issues.

Dutchman Jan Peter de Jong, who was formerly based in Peru and is also passionate about archaeological research, helped to spread the work of Alfredo and Jesus by creating the website "Ancient Mysteries Explained"; he is the author of a multitude of videos on the subject.

These are links to some of their pages, all of them of great interest

Evidence of molding and vitrification:

Of Qengo, vitrification due to extreme heat

Vitrified walls in the area of Cuzco

Just beside the hill of Rodadero; also vitrified

of Ollantaytambo, with vitrification and clear signs of artificiality

Once again a stone vitrified and artificial 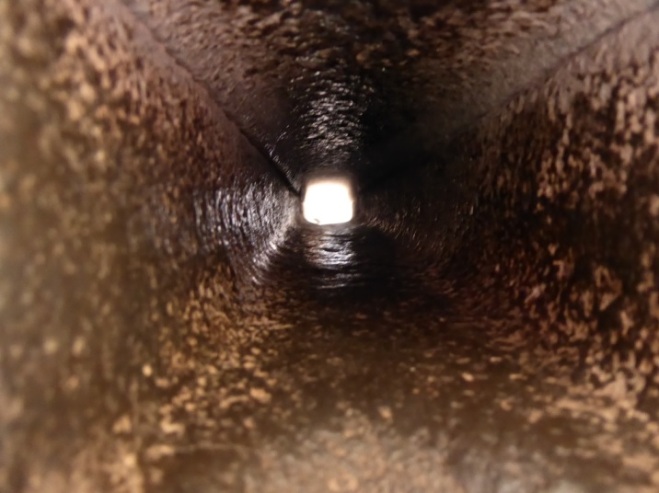 Qorikancha holes; they cross the entire wall of the Qorikancha and are vitrified; to achieve this a temperature of thousands of degrees is required

Molded stones in the antiquity throughout the Earth

It represents to a dragon; on the Orkney Islands, north of Scotland; pickling of the mold

Of Mount Vottovaara, Russia, in close proximity to Finland; here there are many singular megaliths. This is a large stone with a mold and the concrete can be seen in its interior

Pickling of the mold of megaliths exposing the concrete in the interior; Dolmens of Montana, USA, with Julie Ryder

Sigiriya; work in a monolithic block. We see that those who made all this set had a spectacular technology unknown to us using molds and melting the rock; our rotary machines with diamond for stone or band saws for stone would not serve for this type of cuts in monolithic block, because the discs can not make curved cuts, the band saws only make flat cuts from end to end and our lasers can only cut small thicknesses

of Sigiriya; work in one piece reminiscent of the Hanan Pacha stones (from before the last deluge) of Cusco and other places

of Sigiriya; works in stone very similar to the Hanan Pacha of Peru; they are of antediluvian times, with at least 12000 years 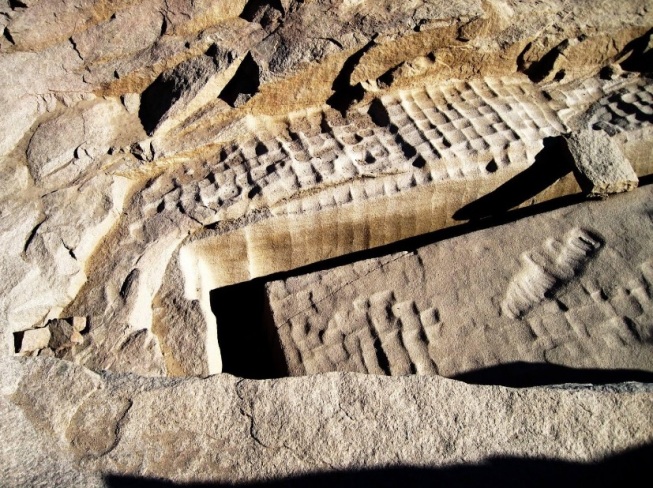 To add to the nonsense

They lie us when we are told that the grooves that we observe in the quarries of Aswan were made with stones, such as dolerite (black granite), based on scraping, because many times they tried to demonstrate what they explain, but did not succeed; they have never succeeded, but in spite of this they try to make us believe that all this was done that way.

How would they then be able to make a large flat panel in the pink granite of the Aswan quarry without sophisticated tools about 5000 years ago? The pink granite is of a hardness of at least 7 in the Mohs scale and today only can be cut with diamond 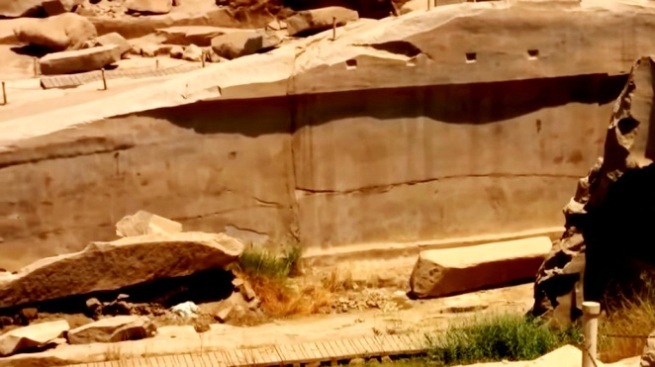 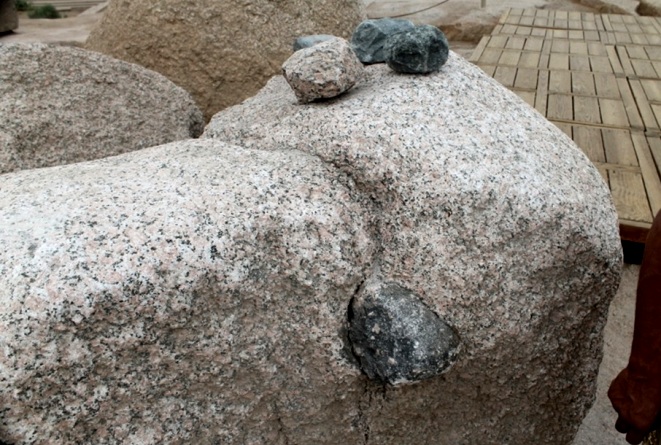 Proof of this are the works of the Grottos of Longyou, in China, at least 2000 years old

grooves in a grotto of Longyou; were withdrawn from the caves nearly a million cubic meters of stone

There are 36 caves that do not communicate with each other, the walls between them go parallel and sometimes with only a half-meter thick partition wall