There are many proofs that what the "science" tells us is false. They do everything they can to hide these proofs.

If someone likes to investigate  will soon realize how the human mass is being manipulated and kept in the darkness in order to not realize that it is slave.

Evidence of the existence of men for many millions of years on Earth are many,  as skeletons of man were found with dinosaur skeletons and footprints of both coexisting.

As for the technology, we have doubts whether certain findings were made by man or coming from space beings, but they are there.

Found in Utah in 1968; shoe print at least 440 million years; in the heel of this shoe is embedded a trilobite.

The geologist Dr. Cecil N. Dougherty put record in his book Valley of Giants of human  footprints for the Cretaceous period in the age of dinosaurs.

Dinosaur footprints along with human footprints; when these traces are lost under the layers of stone, digging they appear again. The footprint on the right corresponds to a shoe.

fossil human finger between 100 and 110 million years; it was found on an island in Arctic Canada; the bottom image is its X rays

Human footprint of 290 million years found in New Mexico; the stone is of the Permian Period

Modern human skeleton found embedded in rock; it was found on the coast of Guadalupe; at least 28 million years.

petrified skull of giant found in an antracite mine; 2800 million years; Pennsylvania, USA

Skull 360 million years old found in Morocco in strata of Devonian period; by scientific studies with CT (computed tomography) it was found that corresponds to a being of the genus Homo adult with worn teeth, although its size is only 18.4 cm of circumference

One of the many human footprints found in the USA Cretaceous period; It corresponds to a shoe with 70 million of years.

Shoe print in which the stitching thread is clearly seen; it is of Triassic period, that is, about 213 million years

Fossilized human hand on a stone of at least 100 million years; Colombia

Statuette found in Nampa, USA when digging a pit, 100 m deep; by strata in which it was found (Plio-Pleistocene) it is at least 2 million years old

Map of Bashkir, Russia, showing reliefs of Urals region. It is a three-dimensional map made by an unknown technology. Displays channels and dams; the scale is 1 cm equivalent to 1.1 km; the area represented has not changed much and it is still recognizable the region and some tectonics fault are represented also. The channels engineering work is gigantic, because it represents about 12,000 km of channels 500 m wide and 12 reservoirs of about 3 km deep each. It has a script that has not been able to decipher, that reminds ancient  China scripts. Whoever created it, should have had flying machines. It has between 120 and 500 million years. Its age was estimated by some shells embedded in its surface.

About 200 stones with inscriptions in this area of the Urals were found and the only one  we can know about is this, as someone did to disappear all the others

Object of 98% aluminum and 2% magnesium found in Vladivostok in coal deposits of 300 million years; it still preserves six teeth of sprocket mechanism. Another surprise for scientists is that it has kept, as the current aluminum is prone to oxidation.

Screw of Serpukhov, Russia, between 320 and 300 million years old; when examined with X-ray it was found having at least one screw inside. It was discarded that it would be a fossil of crinoidea trunk 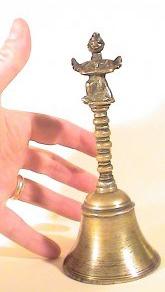 Bell found in USA in a coal mine; It has at least 300 million years.

This is one of the spheres of Klerksdorp, South Africa; hundreds were found in Precambrian strata of 2800 million years old

Stone on the Korikancha, Cuzco

Drilling in Karnak, Egypt, of the time of the Pharaohs, in pink granite from Aswan. Whatever the machine that did this, had to find path through large quartz crystals, and the wall of the drill tube itself is thinner than any other in existence in the 21st century. Someone did this in the distant past with superior technology than ours

more samples the use of technology in ancient Egypt

detail of the advancing of the machine in the previous rock; by the advancing with each rotation it is concluded that the technology used to do this work was of higher level than the actual

in granite; detail the progress of the machine with each rotation in ancient Egypt near Giza

Accurate and consistent cuts in basalt on the plateau of Giza. Basalt is a very hard stone, almost as hard as diamond, and yet, these marks show that a machine was working his way through this stone in the antiquity as if a modern saw would cut through wood. Who were the ancient builders?

This box is one of more than 20 underground in the Serapeum of Saqqara, in black granite with a high content of quartz crystals. The surfaces in some cases are a 2 / 10,000 of an inch of being perfectly flat, and the boxes with their lids weighing up to 100 tons. Clearly this is not the work of a culture of the Bronze Age as the dynastic Egyptians, who did not use iron tools till the eighth century B.C.

signs of the use of machines in ancient Egypt

of granite, on the Elephantine Island; Aswan

another proof of the use of machines in Giza, Egypt

of the ancient Egypt, in granite

of ancient Egypt; It clearly shows that the cuts are made with machines

in the Ollantaytambo area

detail of the previous image 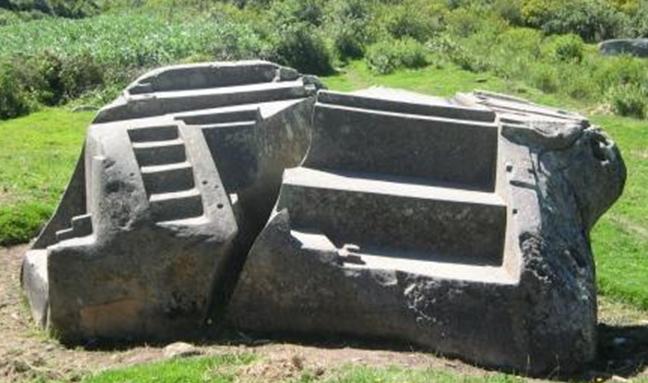 in Puma Punku, Bolivia, there are multiple proofs of using machines. Puma Punku is 3500 m high and has about 14,000 years old; was the seaport of Tiahuanaco when the city was at the height of the sea 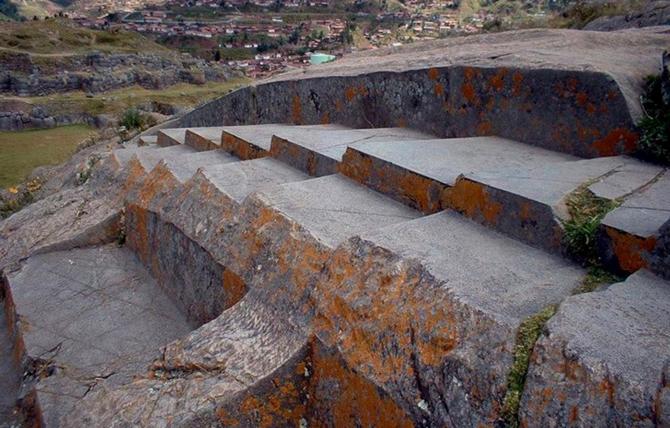 clean machine cuts, made thousands of years before

Stone architecture that seems futuristic in  Yonaguni, Japan; It has many thousands of years

Granite cut and polished surfaces at the time of the pharaohs. These surfaces are as cleanly cut and polished like a mirror reflecting despite being granite one of the hardest materials in the world. Someone had the technology needed at that time 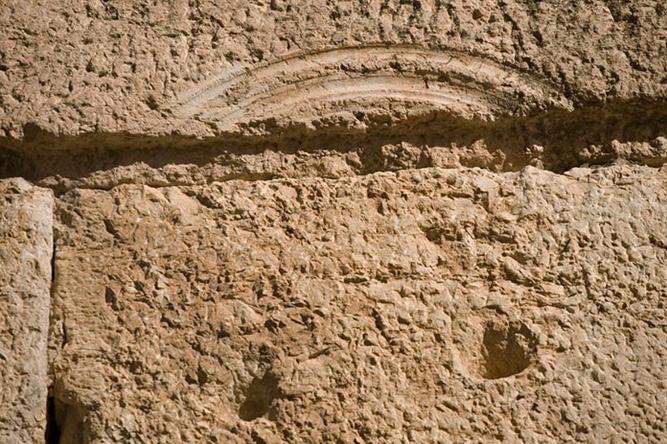 of Baalbek; there are some horizontal stripes suggesting the use of cutting tools that the Romans did not have

basalt statue of Tell Halaf, Syria; Basalt has a hardness of  7 on the Mohs scale (the hardest iron has 5); Tell Halaf dating from the sixth millennium A.C.; the iron, the hardest metal of antiquity, was known in the Middle East from 1200 B.C. and in Europe it was known from the eighth century B.C., but without adequate alloy the iron has only a hardness of 4, so it would be impossible to work the basalt. Something is not right; probably there were different tools to those that tells us the official story or people with advanced technology

of Cavustepe, Turkey; the blocks cut with great perfection, have at least 3000 years of antiquity

Surgery Instruments made of Lidite (black flint)  ; they are some of the objects found in La Mana, Ecuador; It is estimated they have at least 6000 years and there is currently no such technology to replicate them 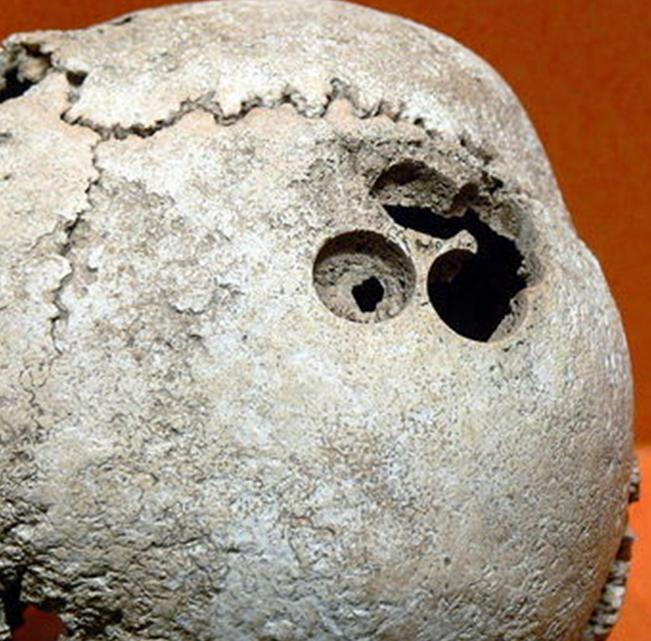 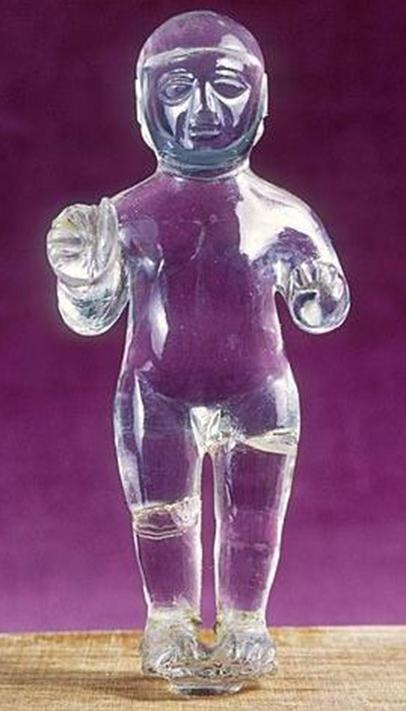 Hittite figure in rock crystal; 1500-1200 A.C .; rock crystal is very hard and difficult to work even today. The crystal skulls found in the pyramids are of this same material.

Do you really believe that with the tools from the Bronze Age could have been made this piece of rock crystal? Iron Age did not begin until the twelfth century B.C., but this material is harder than iron inclusive; rock crystal is of hardness 7 on the Mohs scale and iron has a hardness between 4 and 5; at all ages there were people with high-tech, whether of the same earth, of the hidden elite, or from the space 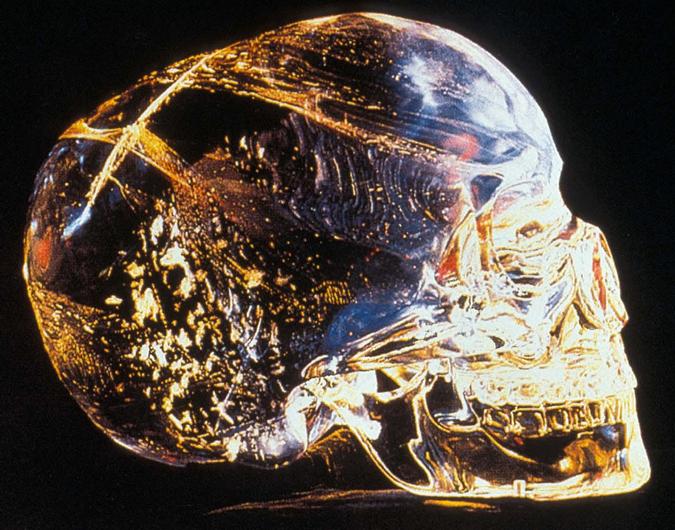 Crystal Skull of Mitchell Hedges called Skull of Destiny; found in the ruins of the Maya city of Lubaantun in Belize; made of pure quartz glass with the part of the jaw movable. It was examined in laboratories of the Hewlett Packard Company in 1970; it was found that it is carved against the natural axis of the crystal, which currently nobody would work, even with laser, as the glass would break; there are no traces of tools been used in its preparation. There is no currently a technology released to our knowledge on Earth to replicate it (there is a lot of technology hidden that only is controlled by the elite)

This is the famous Hammer of Texas; it was found inside a stone dated to 140 million years

Device found within a stone with Ammonites; the most recent are the Cretaceous, 65.5 million years

Dinosaur egg; what is funny on this egg is that it has an engraved mark like a code

Dinosaur footprint; what is curious in it is that it has some signs as if  measurements were done with an instrument

Large machine found deep underground in USA in 1990; six very old machines with hieroglyphs were found and were hidden again

Wheels very old in bronze, found in Peru; they come from a pre-Inca archaeological site

Engraving in stone of the Mayan city of Copan

of the Cocle culture, Panama; Pre-columbian

Artifact found in a chamber under Pakal's tomb, the "astronaut" of Palenque

The Waffle Rock, 300 million years old, USA; someone did decorates on it

Nuclear reactor in Gabon, dated at 1.8 billion years; it is far superior to the current technology; it could belong to an extinct civilization with high technology.

The following was taken from the section: Signs to awake us

I dedicate this to the "science" determined to hide the truth:

This sphere stone four meters in diameter (and another slightly smaller) was recently found in the Sahara buried in the sand. It has drawings that accurately represent complex operations; they include brain transplants and neural connections impossible for modern science plus unknown tools. It is estimated to be about 200,000 years old (two hundred thousand). As usual, the "science" remains silent.

As always, the Secret Government agents have hidden them after carrying them to secret places under their control (Illuminati or other); often they send the military to wipe out the compromising findings

The Nagarjuna caves in India

They have at least 2200 years old and the interior is finished with such fineness as glass despite being dug in the rock; someone had the proper technology to perform these works with absolute perfection of lines and result; they are seven caves