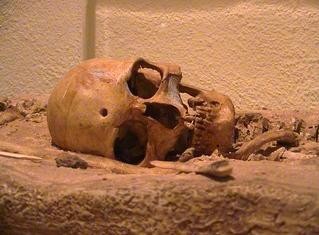 At the Museum of Moiá, Barcelona; Spain. At this museum is found this Cro-Magnon skull of about 10 000 years ago with a head shot (he died about 60 years, a very advanced age at that time and had osteoporosis and rheumatoid arthritis)

At the Museum of paleontology of Moscow

Bison with a shot in the head; this animal native to Yakuzia in Eastern Siberia, has between 300,000 and 70,000 years, when the man was a Neanderthal 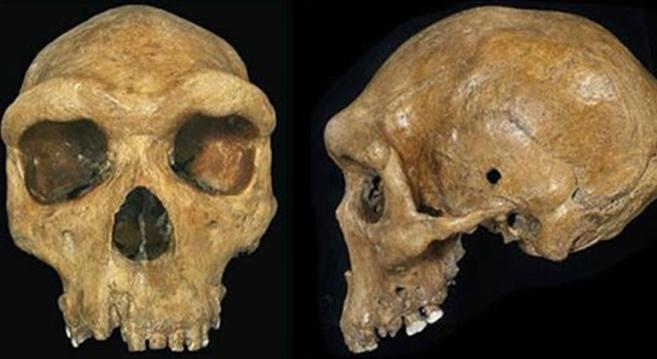 Heidelbergensis type; is a head of enormous size; It has inlet and outlet projectile holes. Modern studies of dating placed it as of 125,000 years of antiquity (before doing the tests was said to be 10 000 years) 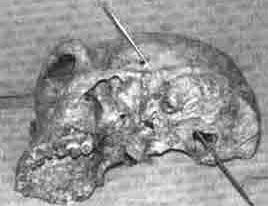 Skull of a Neanderthal (Natural History Museum of London) found in Zambia; It has a bullet hole 40 000 years old

I think it's a great deception to make us believe that a prehistoric man died with a clean hole in his forehead of almost 1 cm in diameter due to a sinusitis; the man would have died thousands of times by the widespread infection of his sinuses before his frontal bone had been affected in this way and, making the impossible assumption that this happened, a hole of less than 1 mm in diameter would have been more than enough to evacuate the pus from the frontal sinus; neither it could be an osteomyelitis* that had affected the bone, because the hole would have been much wider inside, plus, as I expressed earlier that infection would have meant the death before affecting the bone.

The path of the projectile is clearly inclined, and there is a curvature around the hole toward the inner of the cranium, which indicates that something penetrated from the outside; the hole is perfectly round and regular.

Almost always they try to hide something (people of the elite and their minions) the explanation has many more gaps than what they try to hide, in this case someone that was shot in the forehead in prehistoric times, around 10,000 years ago .