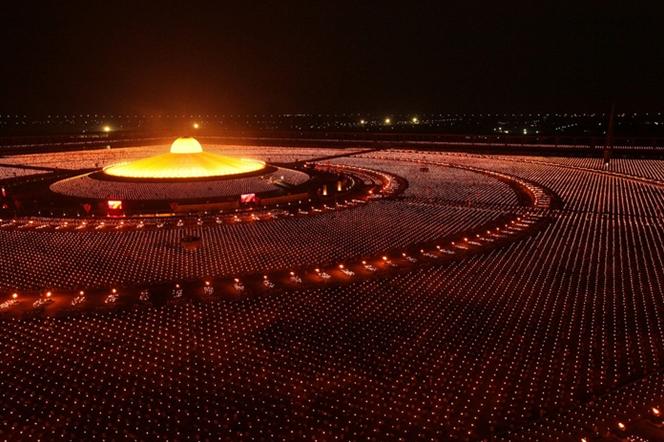 I doubt they have been taught to pray well. They are one hundred thousand Buddhist monks praying for the Earth; I think the repetition of mantras is not a suitable method; it's not about repeat and repeat as if our Elder Brothers would be stupid and do not understand. It is important the visualization and the feeling.

For an authentic prayer it is important to use the visualization, a visualization in which the Earth appears full of light outside of it, inside*, and filling its crust (the shell); of course it is important to ask, because those who can help us can not break the Universal Law of Non Intervention, but it is enough doing it once a day and no more, because we are not asking to a stupid that needs a reminder continually. Visualization is the key, because our thought is creative and if we send Light and Love, this is what we will get in return from the Universe, but amplified.

The repeated prayer, as a repeated phrase, restricts and lowers our condition of Creators, so we will be like the weapon with a defective trigger; however our clear visualization focused on the good (the Light) has an immense power to which the matter and the environment have no choice but to obey transforming the scenario in which we live.

Repeated prayer takes away our power; visualization with feeling gives it to us.

We must not fall into the traps of those who established the conditions of the game, as are the pitfalls of the beings of Darkness, of the beings from the underworld and of those who let themselves be caught in tune with the energies of low frequency.

* The Earth is hollow and its interior is inhabited, and its crust in underground cities; different races inhabit it, and some of them are malignant

Praying to God implies that God and I are independent. Asking God for a favor basically means that we recognize the idea (false) that I am not God. The prayers were appropriate only while our own higher self was asleep, and prayers helped us deal with the pain of separation. We needed a God "above us" to endure the illusion of separation from our origin in order to understand the duality. Now that is ending duality, prayers are not only inadequate; they can interfere significantly with our growth and learning. When we pray, we are asking for something to happen, but we are not here to beg. The sleeping giant is awakening in us. Allowing other Gods are in front or above us is counterproductive to our ascension process in the Oneness of All. The denial of our Divine nature is at the base of violating the laws of nature. This rooted self-deception is the sentence known as the original sin. It is also the cause of duality. However, if we had not experienced all duality we could not be aware of our true heritage.