Homepage > Differences between the cone head skulls and ours

Differences between the cone head skulls and ours

SOME DIFFERENCES BETWEEN THE CONE HEAD SKULLS AND OURS

Down on the R.: Cone head skull with only two cranial plates

The jaws are larger and heavier, with different shape and also are different the muscle inserction protrusions. The thickness of the cranial wall is at least double than the current human skull, which makes them about 60% heavier; also they have at least 25% greater cranial capacity.

The most important differences are these: this skulls have an only parietal bone and its DNA is not human 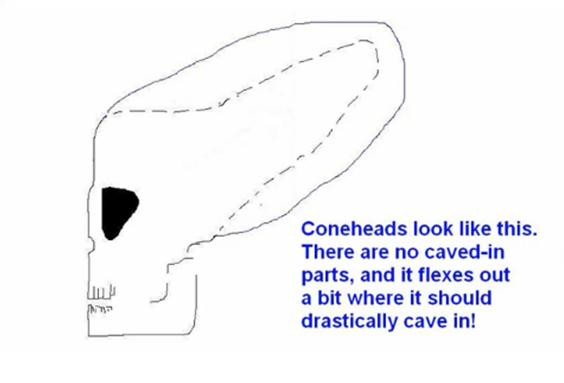 The solid line indicates the "cone head" shape and the dashed line the artificially elongated head; the last is more pointed and has concave areas (curved inward) while the first is convex (outwardly curved)

a parietal bone only; Will you let to be deceived by those who always skipped this detail and others?  Will you let that someone limit your mind to be trapped into the dogma? the "scientists" provide their service to the elite, that is paying, but they do a disservice to the true knowledge that deserves all mankind if they are to evolve toward higher levels of consciousness

an only parietal bone; there is no current human race with this feature
seen from behind

Comparison between a normal skull and one of Paracas 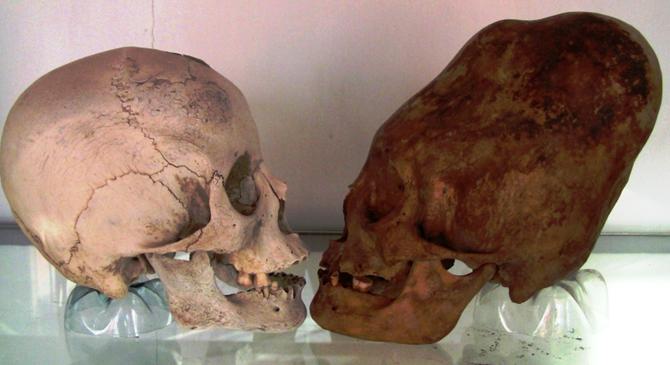 normal skull again compared  with another elongated; see the difference between the two eye sockets

Would affect the cranial stringing or splinting to the eye sockets? The safe answer is "no". Well, the skulls of Paracas of one parietal bone and many of the elongated from around the world have orbits significantly bigger than ours

eye sockets with cavities greater than ours

The existence of human races with skulls with much thicker walls has been known for thousands of years and were known as thick skulls; two thousand years ago Herodotus already talked about it to expose that the walls of the skulls of the Persians were much thicker than those of the Egyptians and was a feature for differentiation

What do you think it is the cause of never noticing the representatives of "science" for the masses the walls of these skulls are at least twice the thickness of the walls of ours? Do you think it is casual never mentioning it? Will you keep believing the lackeys of those who always tried to maintain us without knowledge and slaves who do not realize of their condition despite the increasingly harsh conditions they impose to our existence?

Karen Hudes, a former adviser of the World Bank, says that a non-human race that she calls Homo Capensis is controlling all globally; she states that this race is present on Earth since before the Ice Age; according to Karen, they created the Monetary System to dominate the masses, come from a long lineage and they are who dominate in the shadows.

The skull of Homo Capensis matches with the Paracas skull 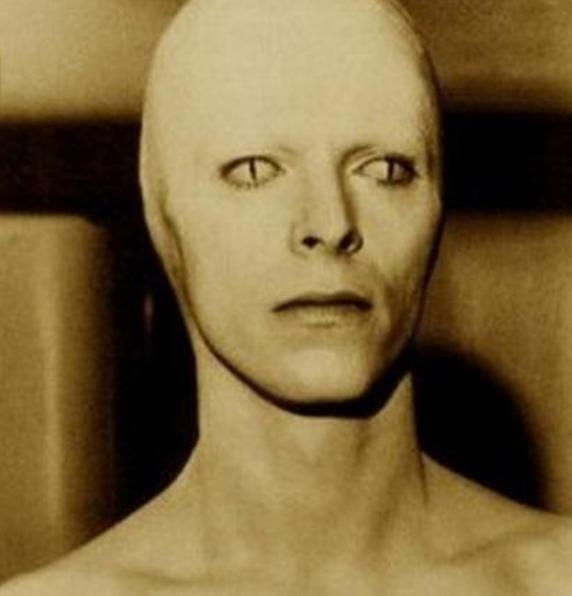 this would be the appearance of Homo capensis

Brien Foerster (researcher) talks us about this differences 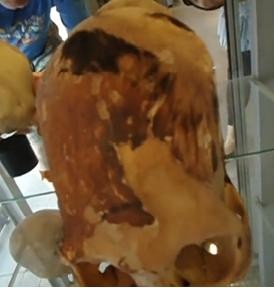 Red, fine hair; the red hair did not exist among Native American people; most of this skulls are of red hair

The size of the eye orbit is greater than normal also 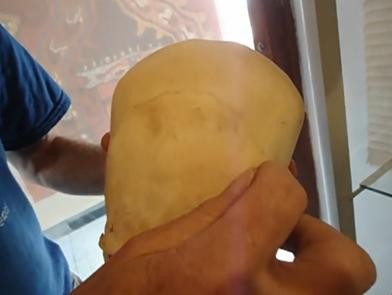 Brien Foerster explaining that these skulls have only a parietal bone and many more details, such as normal nerve insertion holes in us and in these skulls

To see this man explaining visit this link 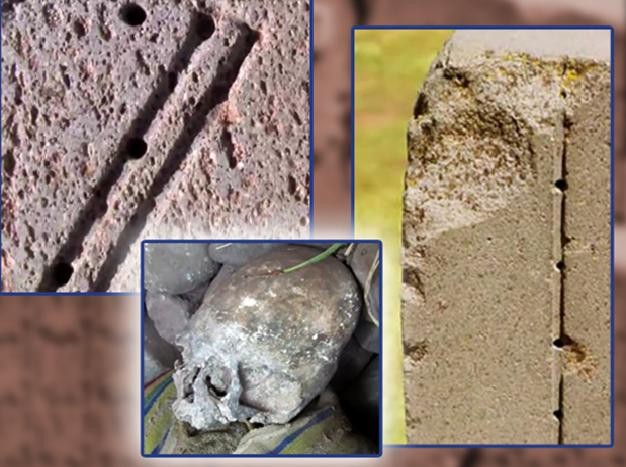 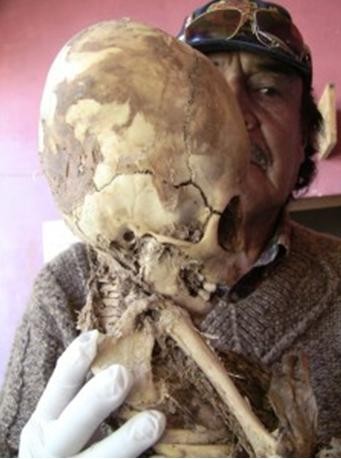 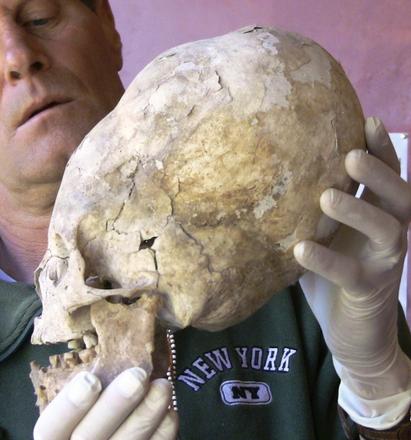 Lastly I include a link so you can see what happens to those who want to be authentic scientists; clearly it is explained what happens when the evidence contradicts the rules, the dogmas; it is explained here how the career of the geologist Virginia Steen McIntyre was ruined because she uncovered that there were people in America that worked artifacts 250000 years ago, in spite of having  stablished the science that the men arrived to América 12000 years ago

FROM MANY YEARS AGO SCIENTISTS KNOW THAT THE SKULLS ALREADY ARE ELONGATED IN THE FETUSES, as two scientists in 1851 wrote a book with their observations:

Rivero and Tschudi in Peruvian Antiquities (1851 Spanish, English 1853) argue that the protagonists of the hypothesis of artificial cranial deformation are wrong*  because only had considered the skulls of adults. In other words, the hypothesis does not account for the skulls of babies and, most importantly, the fetuses had a similar form of elongated skull.

The very formation of the head occurs in unborn children; and this truth we have had convincing evidence to the sight of a fetus, enclosed in the womb of a mummy of a pregnant woman, found in a cave in Huichay, two leagues from Tarma, and is currently in our collection.

*really they are not wrong, but they lie for the interests of their bosses, because what they want is to keep deceived the common people

of Andahuaylas, Peru, to see again the cranial wall thickness

The day you see that they tell us that these skulls have an only parietal bone, something impossible in our species, which have a thickness of cranial walls of at least double than ours and have no human DNA is that, because we have increased our knowledge, they have decided to tell us officially  something closer to the truth offering us a broader knowledge.

While they are distracting us with diseases that produced teratisms* or intentional deformations you can be sure that they still will continue considering us stupid animals and that their intention is to continue taking advantage of us.

But we are who have to earn respect because it is observable in us a change of attitude for having developed a taste for knowledge and for having left the superfluous, since this would leave exposed the deceptions and those who daily deceive us with their dogmas.

El Libertario
*such as turricephaly or other; with turricephaly the skull grows up in a tower shape, but not back
Image: Detmold child mummy; found in Peru, 6500 years old; the baby had less than 9 months and its skull is of the type of Paracas and with red hair, as befits these beings