Homepage > Signs to awake us

Signs to awake us

Old engranving on a stone

Coincides with the image of the previous stone 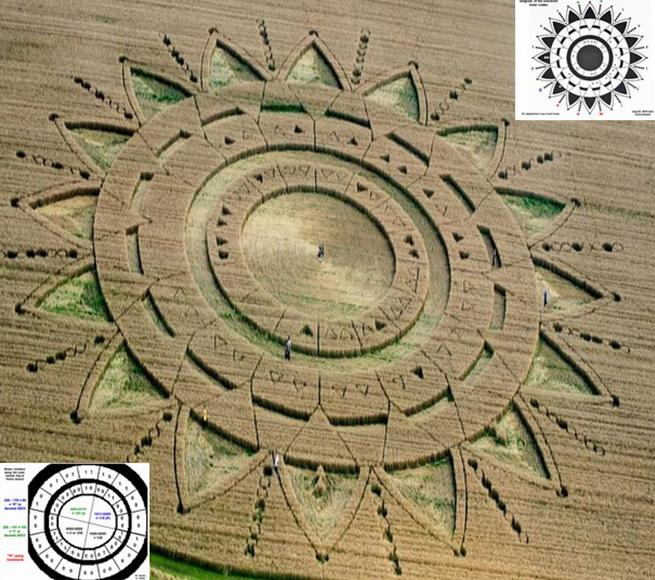 They are realized by small energy balls interacting with our space-time, led by inter dimensional beings to produce in us a shock to contribute to our awakening

In a field near Stonehenge several witnesses testified that on 17,30h was no sign and half an hour later found in that place 151 concentric circles with a measure of 279m; when studied they saw that the plants forming circles had not been cut, but were crushed without breaking the stem; each plant was leaning to one side and was linked with the former and they were affected by chemical and electromagnetic anomalies.

These signs appear all over the Earth

The problem of our world is that most people do not have concerns and most of those who have, kowtow to the deception of the "scientists" without investigating for themselves

When there is a finding that calls into question the dogmas of the kind of new "religion" called "science" is quickly withdrawn from circulation; when it is difficult to hide it because there have been several findings that contradict the official dogma, then they do one or more false photomontages but  not very difficult to discover that they are rigged; they publish them and so are called into question the true findings; unfortunately people with concerns are the first to fall in this deceit of the "science"; these people sold themselves long time ago to the people who pays, who keep us as slaves and they intend to continue to do so while we do not elevate our knowledge. While the best people of our society be fooled like this, our hopes to expose our enslavers will be greatly diminished.

In this way the findings of giants were hid in our planet; faked photos were used in which deception is not too difficult to discover to discredit the true findings

The inexplicable, like the stones of Baalbek or many other issues simply do not address (unfortunately for them it is difficult to remove these stones)

I pass a link to a video in which a person during a stroll recorded with his camera in England alerted by a kind of buzz and found some flying spherules that at one point formed the circles; shivering movements of the camera are appreciated; this leaves no weight to the arguments of people who quickly attempts to discredit saying it is a trick done by computer

They only delight us with their infinite stupidities of the old men who are dedicated to making this in a night or tell us about the crazies who say they did it but then they can not replicate anything alike, making demonstration with small circles, poorly made after several hours of bad job; but the vast majority of the people trusts on the "scientists" who present these big phoneys; almost always they treated us this way, with their lies; it is as if the "scientists" were playing for the Illuminati Rothschild to get their pay.

The truth is that the "science" has a great need for these phoneys unless it wants to become a jester by keeping its postulates.

When they will tell us the truth about everything? This would mean that at last we were released and those who pull the strings have stopped acting.

This video is also instructive; it clearly shows the energy balls

The ruling class wants you ignorant of the messages placed on the crops, denying that their complex and meaningful configurations are real representations of intelligent life in other kingdoms, and deprives you of your place in the cosmic scheme of things.

Therefore, for your own edification, it would be wise to experiment crop circles in person, because if we are printing symbols of Sirius in your field of three-dimensional vision is to communicate with you, to stimulate your answer. We bring you a test, a message tangible, something you can believe it's real. Our desire is to shake people to come out of his drugged, their sedation trance; It is to help those who are unaware to make aware of everything around them. However, you have to first open your eyes to what is visible in your reality before you can see what is floating around you in the ethers.

The Supreme Council of Sirius

The crop formations are of inter dimensional nature. This means that is a higher dimensional consciousness that is manifesting sacred forms within your fields of experience.

We, the Syrians of sixth dimension, actively participate in this form of communication with those of you whose hearts and minds are open to receive us. We are accompanied by Beings of Light of other blocks that also intend to reach you.

When get into these formations, our temporary temples, you experience other earthly presence, which is your spirit entering another reality context, even for an instant.

With each season, new designs are recorded in the fields, and are reflections of our desire to awaken in you the ability to read the cosmometry of all creation

The Supreme Council of Sirius

I dedicate this to the "science" dedicated to hide the truth:

sand. It has drawings that accurately represent complex operations; they include brain transplants and neural connections impossible for modern science plus unknown tools. It is estimated to be abour 200,000 years old (two hundred thousand). As usual, the "science" remained silent.

As always the Secret Government agents have hidden them carrying them to secret places under their control (Illuminati or other); often they send the military to wipe out the compromising findings.

Countless witnesses have given their personal testimony of the presence of the helicopters of the Air Force on the hieroglyphics. There is no doubt that the military would not waste the money of the taxes of the taxpayers' just to keep track of insignificant pranksters, right? Given your resistance against unjust and obsessive regime of taxes, we must infer that you would rebel against such a useless waste. What, then, would you suppose the real interest in the phenomenon of crop circles is?

Credible members of your spiritual and scientific communities have identified in the complex composition of the equations of the hieroglyphs the presence of multidimensional geometry, fractal mathematics, and forms and bio-geometrical vibrations. Still, we note with curiosity that the mass population is willing to accept the explanation given by your leading class of what, perhaps, is the most tangible manifestation of inter-dimensional communication today on your planet.